After repeating the mantra that local elections are local, the overall performances of the main parties at local elections are often discussed by journalists and others.  This commentary tends to focus on the numbers of seats and councils won and lost by each party. But these can be hard to interpret given the very different numbers of seats up for grabs each year and their different profiles at different points in the cycle. (See this article by Chris Game for an excellent discussion of the local elections cycle and this year's elections.) This year's local elections are overwhelmingly for county councils in England. Since these are the Conservative heartlands, the Tories could do very badly and still win the most seats and the most votes.  Indeed, in 2005, the Conservatives topped the shire council elections poll despite Labour winning the general election on the same day.

So perhaps the best indicators for what the local elections tell us about how the parties are faring generally are what the BBC calls the Projected National Share of the vote (PNS) and what Colin Rallings and Michael Thrasher in The Sunday Times call the National Equivalent share of the Vote (NEV).  Both of these essentially aim to be the same thing, an estimate of what the share of the vote would have been if (1) all parts of Great Britain had local elections and (2) the Conservatives, Labour and Liberal Democrats fielded candidates in all wards/divisions.  The idea of these conditions is to provide statistics that are broadly comparable with the circumstances in general elections. The graph shows how the PNS and NEV have changed each year since the early 1980s. 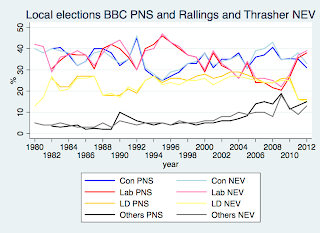 They basically track each other very closely and so tell the same story of major party performance in British local elections.  For the Conservatives and Labour it is possible to link some of the highs and lows with their popularity as measured by general election vote intention in the opinion polls, but there are also periods when the patterns diverge. For instance, in the late 1990s and early 2000s Labour's lead over the Tories in the polls did not produce dominance in the local elections. (They did better in the polls than at the polls.) Meanwhile, since the late 1980s the Liberal Democrats (and predecessors) have consistently done better in local elections than at general elections or in the opinion polls, even with their recent downturn.

The rise of other parties over the past decade has been a key development, and this year much of the attention of commentators will be paid to UKIP. The BBC hasn't published a PNS for UKIP before but will estimate one this year. The key methodological issue with other parties and the PNS/NEV is what to do about their level of candidature. In 2009 UKIP came second in the European elections held on the same day as in local elections, but they only fielded candidates in a quarter of seats where the three main parties also stood. This year their contestation rate, in places where the Conservatives, Labour and LibDems are also competing, is over 80%, much closer to the 88% candidature rate they had in the 2010 general election. Looking back to 2009, Rallings and Thrasher now estimate that UKIP were on 10% in the NEV.

The main method for estimating the PNS is to look at change since one or more previous elections in wards fought by all three main parties both times.  For good measure various different baseline years can be used (both the previous times the wards were fought and previous times the particular seats were contested). Various different levels of aggregation are considered and it is wise to check whether there are systematic differences between different kinds of places in the pattern of change and perhaps weight wards differently to achieve redress imbalances. When local elections coincide with general elections it is possible to compare the local election results with the corresponding (groups of) constituency results. These provide the most reliable baselines, and so can be used to revise historical figures. Social scientists often talk about the virtues of triangulation and robustness checks but I've rarely seen any research do as much as typically goes into the PNS estimates.

Given the lack of a single definitive consistently applied method for calculating the PNS/NEV it is hardly surprising that there should be differences between the two series from time to time. Although politicians on election night may be tempted to pick the historical comparisons that are most flattering to their parties, there are two main things to bare in mind: the PNS and NEV rarely differ by much, and if you want to understand whether the parties are doing better or worse than in previous years, compare PNS with PNS or NEV with NEV, but not PNS with NEV or vice versa.

Thanks to John Curtice, Michael Thrasher and Colin Rallings for comments and help with the data.