Last year I published details of a basic model for forecasting the number of local council seats won from national opinion polls here. The basic idea is to estimate change in seats since the last time they were fought (four years ago) as a function of change in the polls over that time.  Despite the massive increase in UKIP candidature last year and their remarkable achievement of a Projected National Share (PNS) of the vote of 23%, the model still performed relatively well. In part because the even distribution of their vote meant UKIP only won 147 seats.

The following table shows the actual number of gains and losses in 2013, and both my model estimates and the Rallings and Thrasher forecast.


Having updated the model, the estimated gains and losses of seats in tomorrow's local elections are as shown in the table below.

The Rallings and Thrasher forecasts come from their PSA briefing.  The pattern of who's expected to be up and who down is straightforward. The seats up this year were last fought on the same day as the 2010 general election; Labour have recovered since then while the governing parties have gone down in the polls. The Liberal Democrat drop is particularly dramatic.

The difference between my model and the Rallings and Thrasher forecast is that for the two main parties the changes are much more muted in my model, especially for Labour.  This maybe partly because they are also predicting UKIP +80, but that still leaves over 300 seat discrepancy to explain. (My model won't be capable of sensibly estimating UKIP seats till 2016: four years after they first fought a large majority of wards in local elections.)

It also doesn't look like the discrepancy is due to differences in estimates for the overall share of the vote. The Rallings and Thrasher forecast 2014 National Equivalent Vote (NEV, similar to PNS) is Con 30, Lab 33, LD 14, UKIP 16, Other 7.  If anything this shows smaller losses and gains since 2010 than do the opinion polls I'm using.

The graph below shows both the polls and the PNS over time. The rise of UKIP last year led to bigger drops in the PNS for Labour and the Conservatives than might otherwise be expected.  Given the changes in the polls since 2013 and the concurrent Euro elections, the PNS for Con, Lab and UKIP could be close, with UKIP likely to do better than the 16% Rallings and Thrasher have forecast for them. 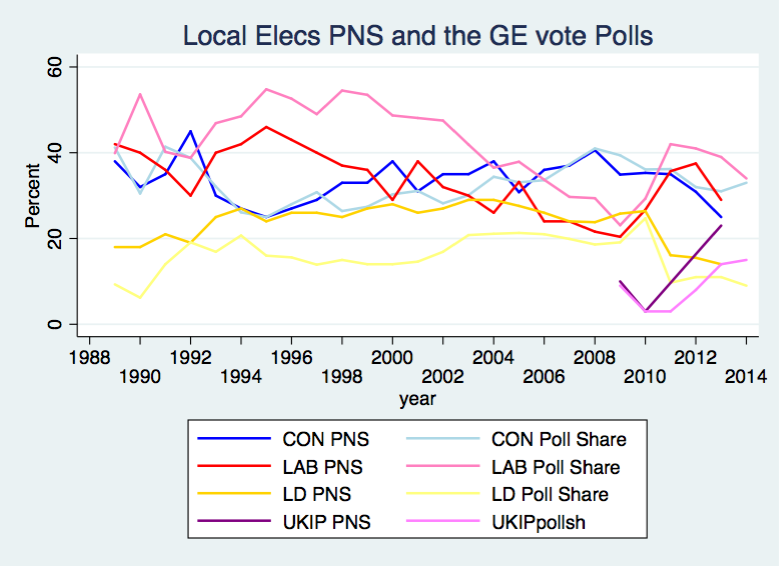 Returning to the seats forecasts, the differences between the two are most likely to be due to Rallings & Thrasher more careful ward level estimates. My model is a national level only one, estimating the overall share of seats won by each party. Their approach is more detailed and should work better.

Acknowledgements: Thanks to David Cowling, John Curtice, and Michael Thrasher for help with the data.